Curriculum Design: Get Out There!

If there's one thing I would cite as being at the heart of a wonderful curriculum, it would be this: GET OUT!

In a culture and social climate where children's engagement with their local environment, green space and community is at an all-time-low, it seems clear that school's have a life-changing opportunity to open more doors than one, for their pupils.

In a world where we're evermore connected, are we also increasingly isolated, scrutinised and afraid to interact?

Years ago, when working in an inner-city school at the centre of a built-up estate which was well known for being "troubled", I recall teaching a writing lesson with a group of Year Four or Five pupils with a focus on fantasy settings. We'd read a number of engaging, inspiring examples and considered the language features. I'd recounted my love of fantasy stories and films as a child myself and enthused about the journeys of the mind I had been on. The children were technically competent to write their own fantasy story but there was a massive brick wall that presented itself as the children began to write. I remember the room being quiet, music playing in the background, the children were flipping back and forth to their notes and preparations as they tried to plan. Some were awkwardly sneaking a peek at their neighbours' blank pages, hoping for inspiration to hit. They looked at each other, looked at me, looked at the floor... It was so out of character for them. Perplexed, I read over a couple of shoulders. One of the children had begun with this:

"In Asda, there were bright lights and loud beeps..."

The problem was this: As I had insisted that their own story settings be original and of their own creation, my preparations were woefully lacking! The majority of children had no real-life experience of any setting beyond their living room, a rundown park and the local supermarket that might be even remotely magical or fantastical. We stopped. The ensuing discussion was a real eye-opener for me, then. The vast majority hadn't been to a beach, seen the sea, walked through open fields, been at the heart of a woodland... They couldn't draw on the experiences that many of us might recall as seeming astonishing or wondrous whilst out in nature because, well, they hadn't been!

You only have to flick through the news headlines to see the impact of this present day epidemic: 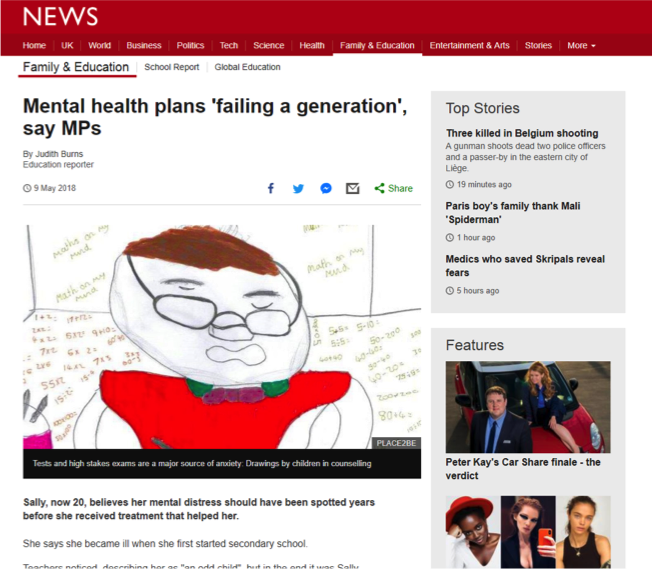 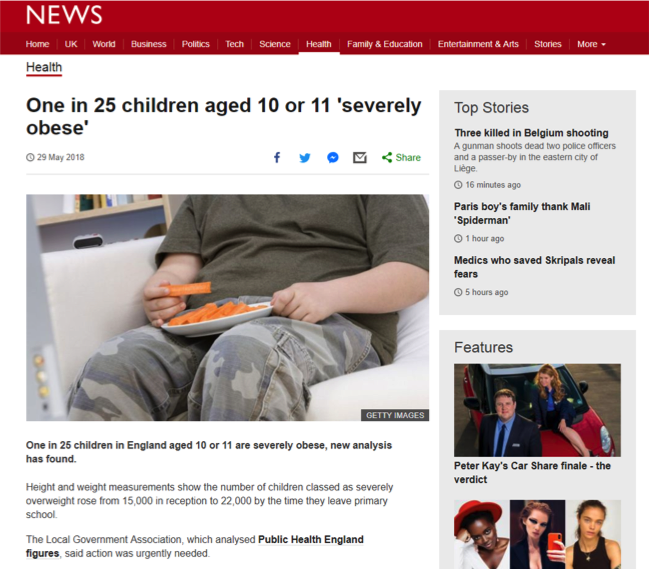 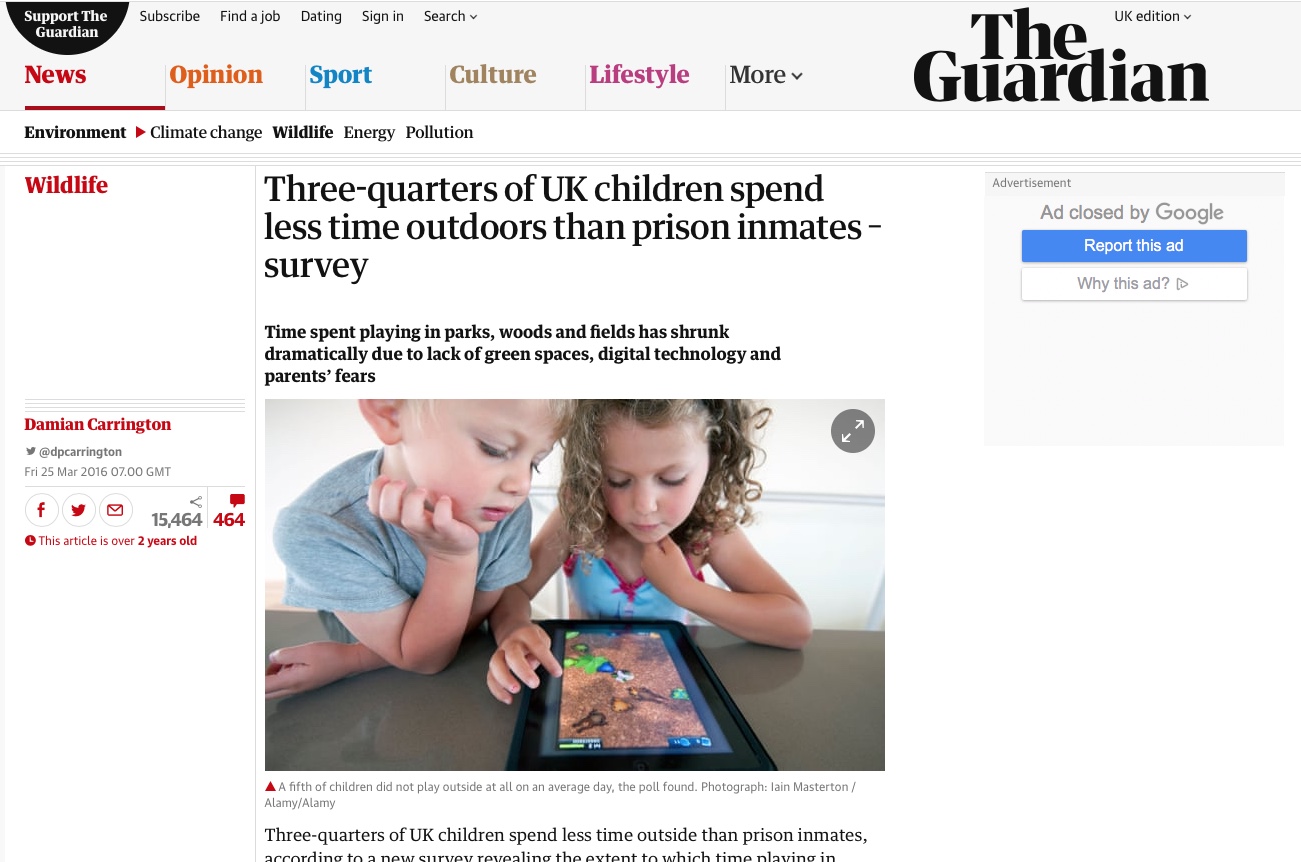 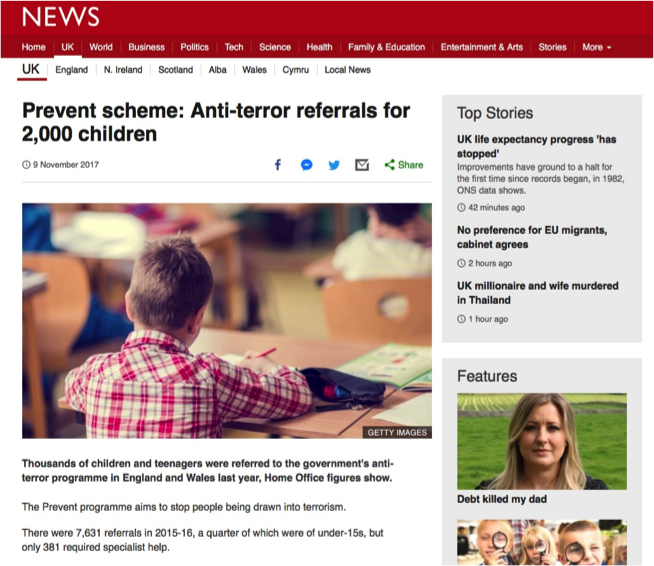 And despite the sensationalism, we as educators are seeing the truth behind these headlines in our classrooms and schools day in and day out. Perhaps, significantly, the decline of proactive, multi-agency support for schools to advise and tackle children's physical and mental health barriers to development goes hand in hand with this perfect storm. Teachers are not mental health experts and social workers. We cannot and should not be responsible for meeting the complex needs of children who so desperately require medical and psychological intervention — but being teachers, many of us can't sit back and oversee suffering. We can play a significant role in prevention and that has to be acknowledged.

Well, I don't know how to solve it all, but I'd stake my life on the fact that a narrow curriculum which is fact-centric, disproportionately academic, test driven and increasingly 'busy', isn't helping. Might also have something to do with teachers' mental health and wellbeing concerns too!

In my time as Headteacher, I can say that no one thing has had a greater impact on the happiness, achievement, connectedness and wellbeing of pupils and staff than learning outside the classroom and within natural environments.

In the past decade, five significant, independent reviews have been conducted both nationally and internationally which focus on the impact of children learning in the natural environment. Each of them provide compelling evidence that outdoor learning can — and does — make a significant, positive impact on children’s mental health, physical health and social and academic progress.

The 'Natural Connections Project', which ran between 2012 and 2016 in the South West of England was intended to build teacher confidence in the planning and delivery of learning in natural environments by connecting educators with hubs of excellence that could provide the input, inspiration and expertise to support teacher confidence and skill development. 125 schools participated and contributed to the findings. A survey of these findings showed that teachers felt the project had made a significant, positive impact on pupils' enjoyment of learning, wellbeing, social skills, connection with nature, behaviour and attainment. They also said that their own concerns and fears about learning outside had been significantly reduced by working in partnership. It's always great to get feedback from teachers themselves, isn't it? The full report can be downloaded by clicking the link below:

Though my school wasn't involved in this project, I'm not surprised by its' findings one iota. At around the same time, we were building a curriculum which had a bias towards learning outside the classroom. Though none of us, as educators, were experts, we were keen and committed to the value of the natural environment and potential benefit to children's development. We set about the task of mapping out the skills and competencies that we hoped our children would achieve across the curriculum and paid particular attention to where learning in the natural environment could enhance this experience. Over time, we would come to learn that very little can't be taught as well as, or better than, in a traditional classroom setting.

Over the first two years or so, an entirely natural EYFS outdoor environment was built — by the fair hands of staff, parents and a few generous local businesses — which included raised beds, a fenced duck pond, a guinea-pig enclosure, an outdoor storytelling log-circle and a summerhouse; affectionately labelled — in a child's handwriting — "The Bug Hut". The impact on children's engagement, independence, confidence, social skills, physical development, collaboration... all of it... was immense. Through inspirational teaching, the children learned how to care for the space, how to nurture it and learn from its' seasonal changes and endless possibilities for imaginative work and play. My office window overlooked the space from afar and I can tell you, there was an impact on my wellbeing just from observing it each day.

We also developed a nearby woodland area, which the school was able to occupy under licence, to include a canopied log-circle, a wet-weather shelter and a composting toilet. It wasn't massive, but it was big enough that you could sit in the middle of it and just about be forgiven for thinking you were miles away in the dense forests of a national park. The reality was, a well-aimed stone could probably make it to the B-road that separated the school from the forest. As our woodland classroom was created from donated materials and constructed by a group of parents and staff over a warm, summers' weekend fuelled by laughter, coffee and pizza, the financial cost was minimal. But again, the impact was immediate and sustained. Each class participated not only in Forest School activities, but also in learning across the curriculum. As a staff, we'd invested in valuable CPD through experienced and expert advisors in this interim, so were keen to practice and develop. A whole-school focus on Shakespeare's 'A Midsummer Night's Dream' was planned and we set to work. Much of the week was spent in the forest. I'll never forget the Friday afternoon when we invited parents over to watch the whole school share their learning from the week. The dappled sun shone down through the leaves of the trees as the adults sat in stunned silence observing four-year-olds perform rhymes and dances in handmade costumes, eight-year-olds recite play extracts in Shakespearean English with the confidence and aplomb of Branagh or McKellen, eleven-year-olds guide the audience on a whistle-stop-tour of Elizabethan history and the theatre, complete with scale-models and artefacts... They learned a lot that week; about Shakespeare, about working together, about having fun, performing, rolling in leaves, self-confidence and the magic of fairies and the imagination.

In subsequent years, the school developed an outdoor classroom: a wooden structure on the school site, which housed a wood burning stove, tables and chairs, bug hunting pots, a cozy corner, sifting trays, propagators and gingham curtains. The space was a valuable launching-off-point for work in the school's more immediate grounds and was utilised for small-group work, as well for retreating to when the inevitable downpours of winter came. We also welcomed a small-holding of four pigs that were tended by a local, private owner during evenings and weekends and a kitchen garden that went — under the wing of our school's gardener — from a patch of overgrown grass to a much-loved and highly productive part of the school's facilities. I can't tell you how much pride beams from the faces of children as they see produce from the kitchen garden appear on their lunch plate.

Ours was a school in which calculated risk amongst staff was encouraged and applauded. I never wanted the staff to get too caught up with the pressures that might be perceived as coming from external bodies like OFSTED or similar. I believed in our values and our ability to achieve our vision wholeheartedly. Of course, we wanted our efforts to be valued and acknowledged by the big 'O', but more importantly, we wanted to go to bed at night confident that our school was doing what was best for its' children. That was the main thing...

If I had to sum up my views about the transformative impact of developing a curriculum that promotes learning in natural environments, it is this: Do it. And if you're worried that it's too "woolly" or lacks rigour to promote the kind of academic gains OFSTED or your attached advisor is looking for, rest assured. We saw year-on-year progress and attainment that placed our school in the top ten percent nationally at all key stages, gained a reputation locally that parents cherished and that filled our school with a long waiting list to boot. Staff retention was high, absence was low and satisfaction surveys were always pleasant reading over the summer holidays, for me.

Importantly, we were not aficionados or eco-warriors... we were just teachers who saw that our children deserved better than the 'typical' curriculum could offer. Yes, we wanted to provide a forum for academic excellence for those who would find their path in that direction, but we also wanted to find new paths that recognised that every child is important — and that every child has the potential to make a difference. They deserved to be confident, happy, engaged, challenging, quirky, funny beings whose individuality could thrive under a layer of mud.

'John Newton Education' is the culmination of my experience and ambition to support all educators to reflect on their values and practices. If you'd like to know more about how I could support your school or event, please contact me.

Enough of 'Whatever it takes'